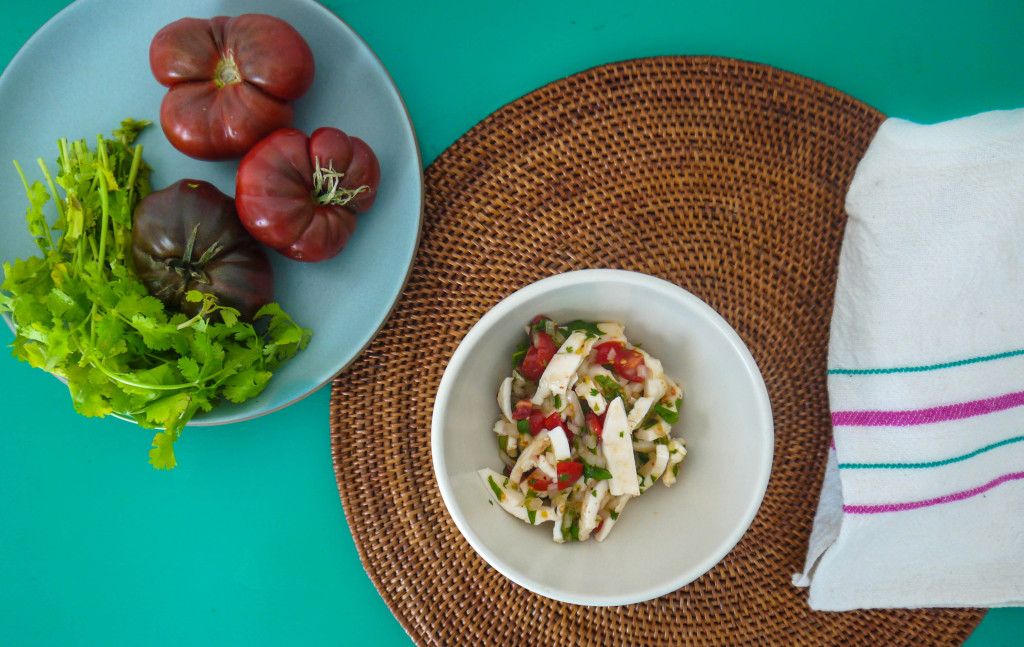 In Sanskrit, the coconut palm is called kalpa vriksha, which translates to something along the lines of tree that gives all that is necessary for living. When you start researching the tropical fruit, it’s hard to argue with that, lofty as it may sound.  Coconuts have long been used as a therapeutic food for everything from kidney and liver disorders to digestive ailments to antibacterial treatments. The flesh of a young coconut is soothing for the digestive organs, has a gentle laxative effect, and is full of iodine which supports thyroid function. Coconut oil is known to stabilize blood sugar, improve mineral absorption, and protect against yeast, bacteria, fungi and parasites. The water from a coconut is known to be one of the most potent natural sources of electrolytes, with particularly high levels of magnesium and potassium, making it an excellent hydrator and source of replenishment for our blood. In fact, coconut water so closely mimics our own plasma that in the Pacific War (1941-1945), the water, siphoned straight from the sterile nut, was used as emergency plasma transfusions for the wounded.

The first time I tasted fresh coconut water, I was eight. My parents, my sister and I were visiting a small chain of islands in the Pacific called The Marshall Islands. My dad lived there as a Peace Corps volunteer in the late 1960s, and my uncle was, at the time we visited, living there with his wife, working as a traveling doctor on a small sail boat that moved from atoll to atoll. The atolls are flat (around 7 feet above sea level) and narrow, made of stunning coral reefs, sand and coconut palms. Needless to say, there isn’t much in the way of potable ground water. There was imported bottled water to drink, or rain catchment water that had to be boiled before drinking. Best of all, there were young, green coconuts, their tops sliced off with a battered machete leaving a heavy cup filled with slightly sweet, clean nectar. When we’d had our fill, we’d toss the wasted shells on the ground or into the sea. What freedom!

The coconut water that has become so ubiquitous in grocery stores these days is not the same. Most of it has been pasteurized, and more often than not, the product tastes sugary as opposed to fruity, sticky as opposed to refreshing. From time to time I’ll see young coconuts in the produce section of the grocery store. They’ve been stripped of their green husks, leaving a fibrous, white, cube-like structure around the nut. It takes a few confident whacks with a sturdy kitchen knife to get into the thing, and they aren’t cheap, but the reward is worth it. This is different than the coconut water you find in a bottle. This water has a fresh sweetness, not at all cloying, and a soft, round mouthfeel, something almost savory about the lingering flavor on your tongue. Perhaps better still is the rare pleasure of eating the meat clinging to the inside of the shell. Unlike the starchy, sugary fruit of an older coconut (the small brown-husked ones), young coconut meat is vibrant, alive, a pure, glistening white. The flesh is firm and toothsome–much like the tender meat of a steak fish–and simultaneously silky. 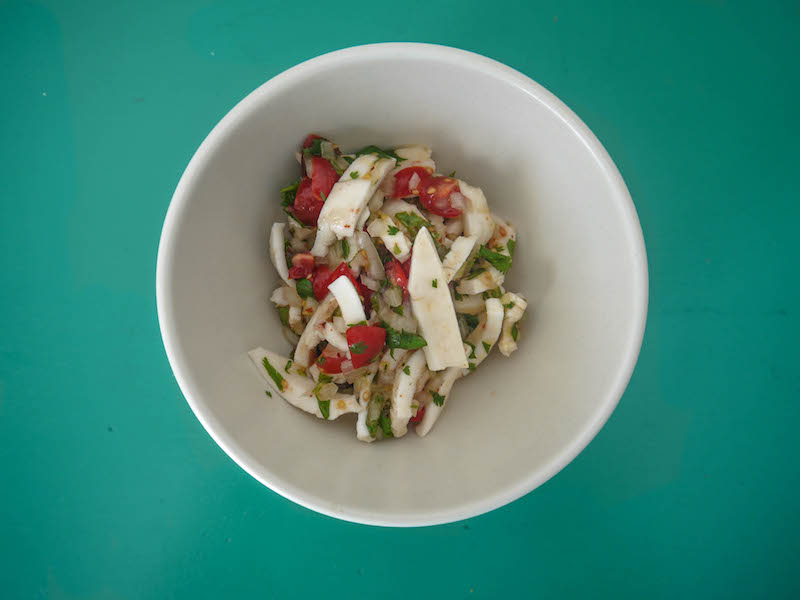 When I can resist the impulse to simply scoop the flesh straight from the coconut and into my mouth with a spoon, I like to use it for coconut pudding, or add it to curries, or freeze it in chunks to thicken a smoothie. A few days ago, inspired by the soaring temperatures here in Texas, and craving a deep hydration, I succumbed to the call of the fresh coconuts on ice at the market. After a few stern taps with a hammer on the back of my butcher knife, I cleaved off the tops. The coconuts were full of water, at their perfect ripeness, the meat silky, pliable, peeling easily away from the inside of the shells. I cut off a slice–tender, not too sweet, delicate, cool. Like the freshest fish–too perfect to freeze or cook–and thus, ceviche.

If you have never cut into a young coconut before, here is a good step-by-step tutorial. Do your best to scoop the flesh out in large pieces so you can cut it to the size you desire. The water is best consumed immediately or at least within 24 hours. You could also freeze it for later use but why wait?!

-Place all the ingredients in a bowl and toss gently with your hands to evenly combine. Chill in the fridge for at least one hour or overnight. Toss again and taste before serving. Adjust seasoning as needed. Delicious with warm corn tortillas or scooped up with thick tortilla chips. You can toss cubes of avocado in before serving for a different take on guacamole.

-Will keep in fridge for 48 hours.