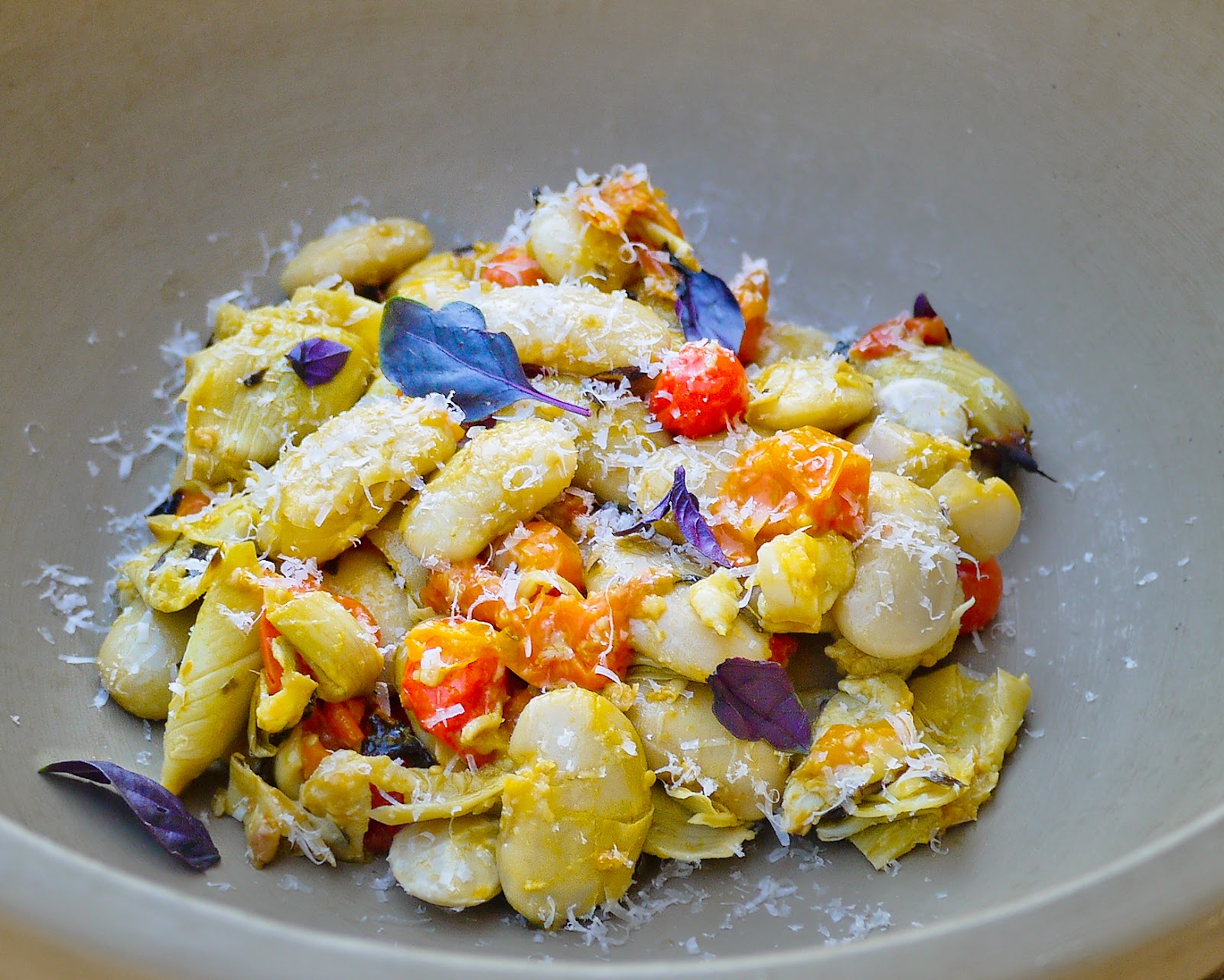 There are few things I love more than a summer garden bounty. A unique excitement comes over me when I step out of my door and walk a few feet into the garden to determine what I will eat for my next meal. The part of my brain that requires tangible results, proof of patience or of hard work or of quantifiable value, really loves gardening. The carrot patch is full of weeds? Hours later it can be picked clean, thinned out and tidy, leaving only the cheerful froth of carrot tops, breathing more easily in their newly spacious soil. The thinnings become a snack or pesto or compost. When it all goes well, nothing is wasted. But bounty is not without its challenges. I remember Sandor Katz saying in an interview that no one told him when he first started gardening that everything would ripen at the same time. What do you do with all that produce? Katz’s solution was fermenting and preserving.

As you know, this is not the first time I’ve confronted the issue of overabundance in the backyard. After swearing off zucchinis, the problem is easier to deal with. The plants that won’t stop producing this year are the Sungold tomatoes. We harvest them daily and still, within hours of picking the vines clean, I look outside and see the sweet, orange little orbs that I missed or that have suddenly ripened, taunting me, reminding me that there is work yet to do. Luckily, the fruit is delicious raw, right off the vine. But when the counter is covered in overflowing bowls of tomatoes, some processing is required. 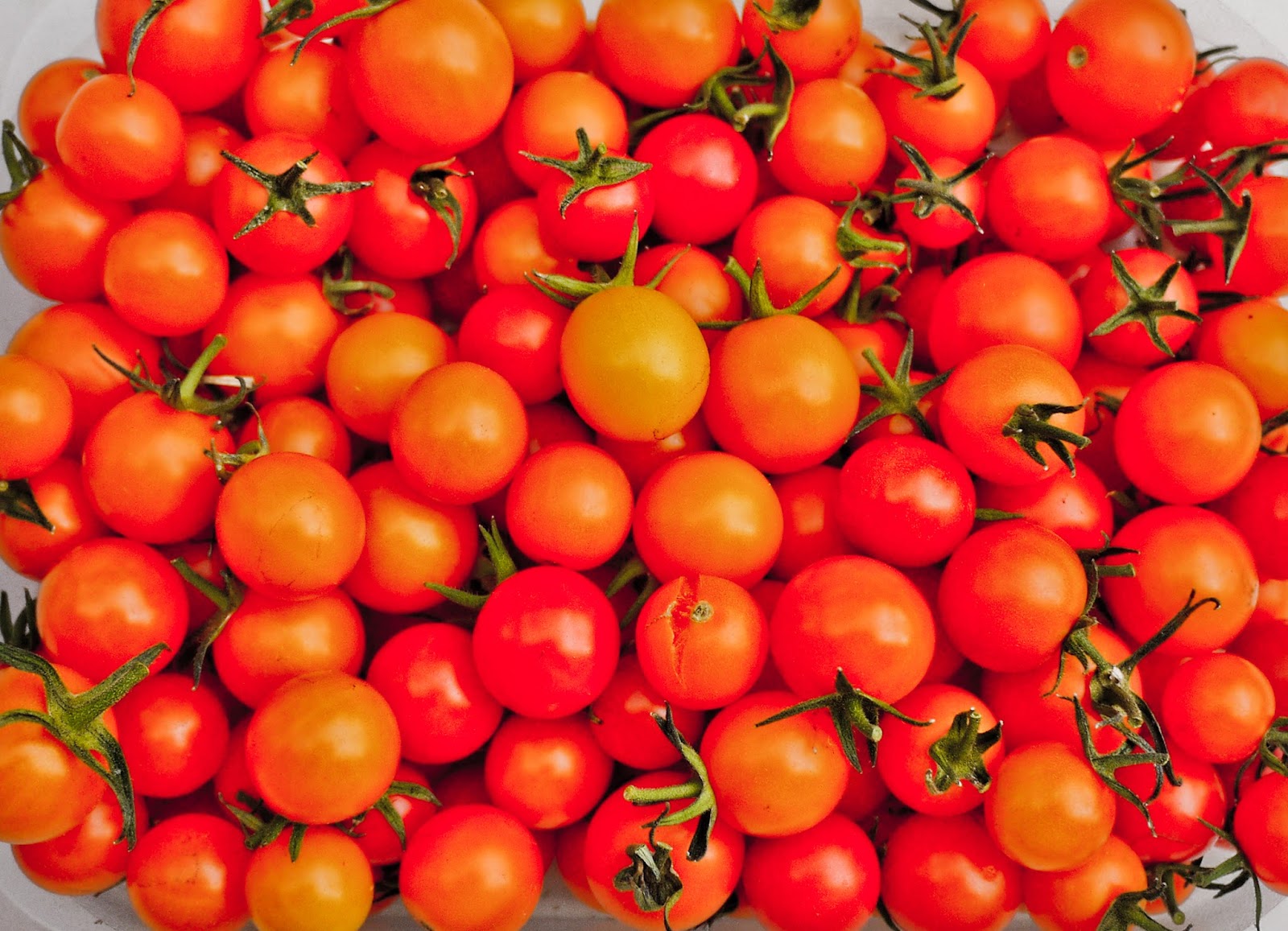 Slow-roasting tomatoes is a great way to preserve. The flavors get concentrated, richer, full of that ever elusive umami quality. They are delicious spread on sandwiches, made into a dip, or added to pasta sauces and stews. Roasted tomatoes easily last a week in the fridge. It’s also nice to throw them in the freezer and pull them out in the winter when grocery store tomatoes are nothing more than hard and tasteless imposters.

A happy accident brought me to this next recipe. I wasn’t long into roasting a pan of tomatoes when I realized my timing was off and I needed to leave the house before the roasting was complete. I pulled the tomatoes out after about an hour and left them to cool on the stove top. They were soft, bursting out of their skins, full of the bright, sweet flavors of the raw fruit, but with an added complexity and a slight richness to them. 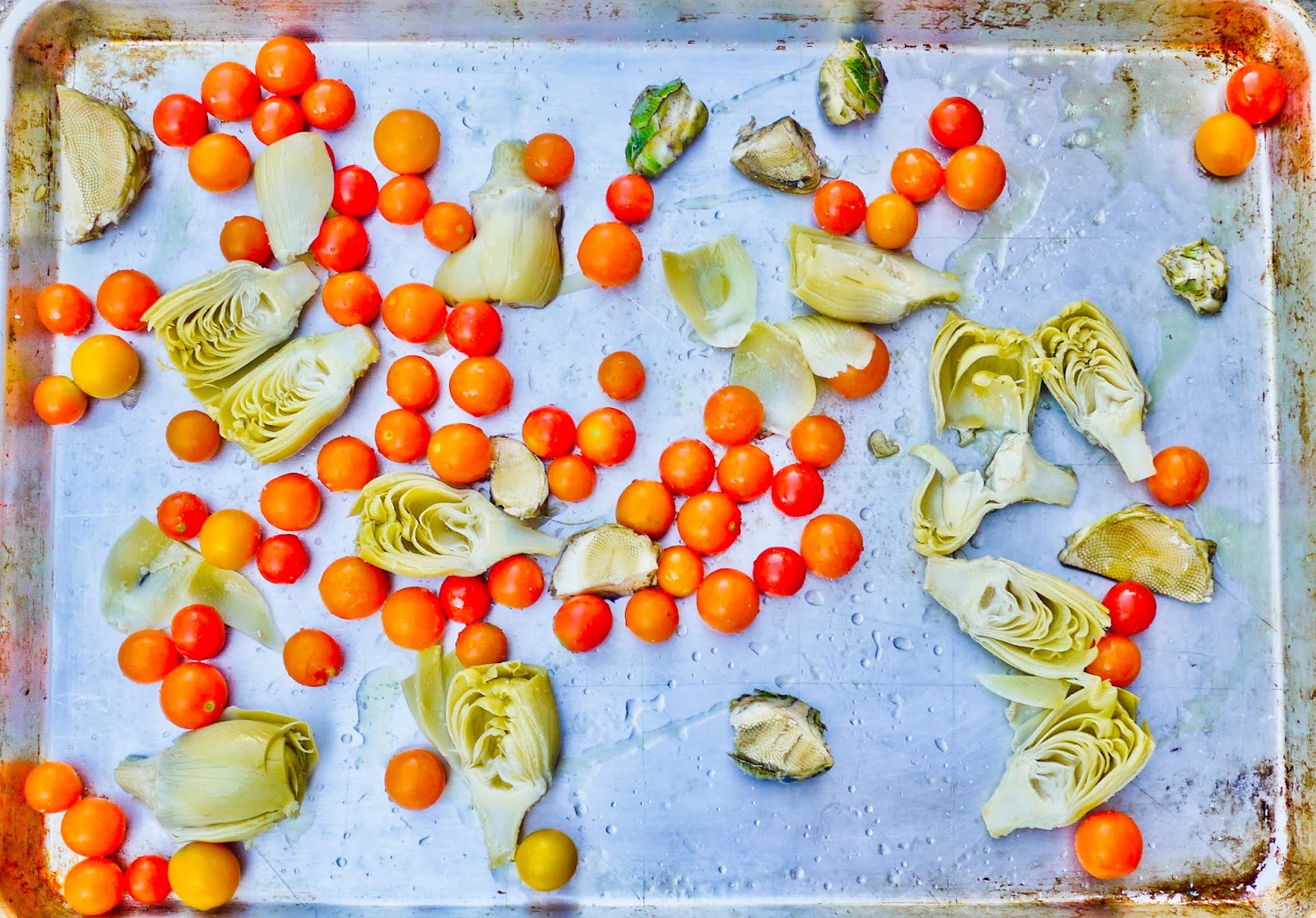 Hours later, hungry and out of patience for a slow roast, I turned to improvisation for inspiration. I had gigante beans in the fridge from earlier in the week and a couple of cans of artichoke hearts. I threw the artichoke hearts, tomatoes, a few cloves of garlic and the white beans into a roasting pan, covered it all with some chicken stock and threw it in the oven for an hour. The result, topped with pecorino and basil, was a hot dish of comforting, savory beans, hearty enough to be a meal alone and with all the lightness of summer time food. I have recreated this with slight tweaks, every week since the first try. Fingers crossed, this bounty lasts a few more weeks.

1.5 cups gigante beans, rinsed and soaked overnight
2 cans artichoke hearts, rinsed & halved
2 cups sungold tomatoes (halved if very large)
1/2 cup chicken stock
6 cloves garlic, peeled and smashed
olive oil
handful purple basil
fresh grated Pecorino Romano to garnish
salt and pepper to taste
To cook the gigante beans pour the beans and soaking water into a large pot. Add more water to cover if needed. Bring the beans to a boil then reduce to a simmer and cook until a fork goes easily through. You want them to still have a bit of firmness. This takes 45 minutes to an hour. This step can be done the day before.
Preheat the oven to 250 degrees. On a rimmed sheet tray spread the tomatoes in a single layer. Drizzle with olive oil and toss gently to evenly coat. Roast about 45 minutes and remove the tray and increase the temperature on the oven to 400 degrees.
Combine the beans, garlic, tomatoes and artichoke hearts in a roasting pan. Add the chicken broth, a generous dash of salt and lots of cracked black pepper. Stir everything together well and return to the oven. Let bake for 45 minutes to an hour, stirring occasionally. If the pan dries out, add more chicken broth. The longer you can let the pan go, the softer the beans become.
Once everything is cooked to your liking, remove the baking dish and let cool for 5 minutes. Serve alone or as a side, topped with chopped basil, fresh grated Pecorino Romano, more pepper and maybe some lemon zest too.
Tagged with → artichoke • beans • comfort food • main dish • preservation • sides • summer bounty • tomato
Share →
Tweet

3 Responses to Slow Roasted Gigante Beans with Tomato and Artichoke