Smoked Beet Vinaigrette and the Power of Play 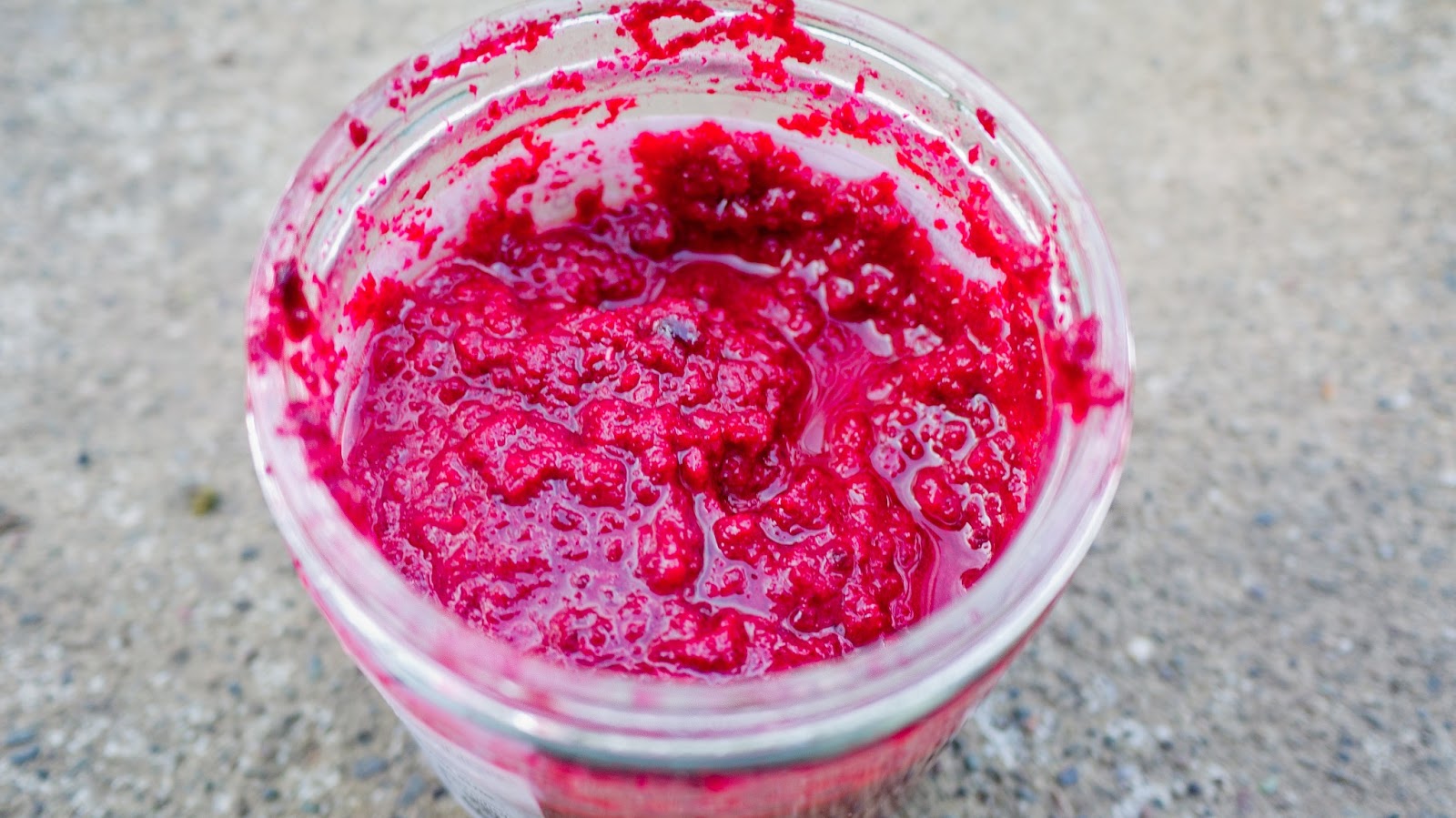 In the past couple of weeks I have found myself in a bit of a rut. A culinary rut.  I kept scanning the kitchen for something that would satisfy my hunger and I kept coming up short. Then I realized that I have been cooking variations on a few themes as many of us do when we have busy schedules. It wasn’t that I was bored of any individual ingredient but more that I craved a set of flavors that were different from my instinctual repertoire. Ordinarily in this situation I would turn to favorite food blogs or my overflowing book shelf of inspirational cookbooks, but instead I went for good, old-fashioned, blind experimentation.

I had a physics teacher in high school who used to make my blood boil in lab because nine times out of ten, when I asked him a question about how to do something he would smirk, shrug, and say, “simple physics, figure it out.” It was so dismissive! So evasive! So TEACHERLY! I’d love to say that this method ended up working for me but I got an abysmal grade in Physics and to this day, really couldn’t define “simple physics” for you because the two words are clearly mutually exclusive. That being said, Mr. Smirky Physics Teacher probably did nurture in me a more fearless approach to experimentation and trial and error, a practice on which I have come to rely heavily in cooking.
My first plan was to make a roasted beet vinaigrette with the couple of un-juiced beets wallowing in the corner of my fridge. So I roasted beets, got busy with something else and left the beets to wallow again, this time peeled and cooked and placed prominently on the top shelf of the fridge so as not to be forgotten. The next day, while waiting in an absurdly long line to get an expensive, pour-over coffee at my local market, I spied a curious item: Smoked Olive Oil. As a rule I really dislike olive oils that have been infused and stuffed with other things before being bottled and sold as a “dipping oil”. But this intrigued me. It reminded me, suddenly, of a near perfect day in Barcelona, at a table with my family and a paella made from smoked rice. I bought the oil.

When it comes to salad dressings I am pretty much a purist. Sure, I’ll dabble in the occasional novelty dressing, but in the day to day I gravitate towards simple vinaigrettes or even just a squeeze of lemon and a glug of good olive oil. In the spirit of play I decided to marry my roasted beets and my smoked olive oil and hope for a happy union. It took a lot of tasting and tweaking and you should know that the measurements in the recipe below are estimated at best. This is basically a non-recipe, recipe. I mean, you know, it’s simple cooking……

Note: I used about 8oz of beets and went for a pretty chunky dressing that had more of a spread-like texture than a classic salad dressing. I had leftovers for days which I then mixed into quinoa, added to sandwiches, and used as a dip. You will want to play and experiment to see what texture and consistency you like best. 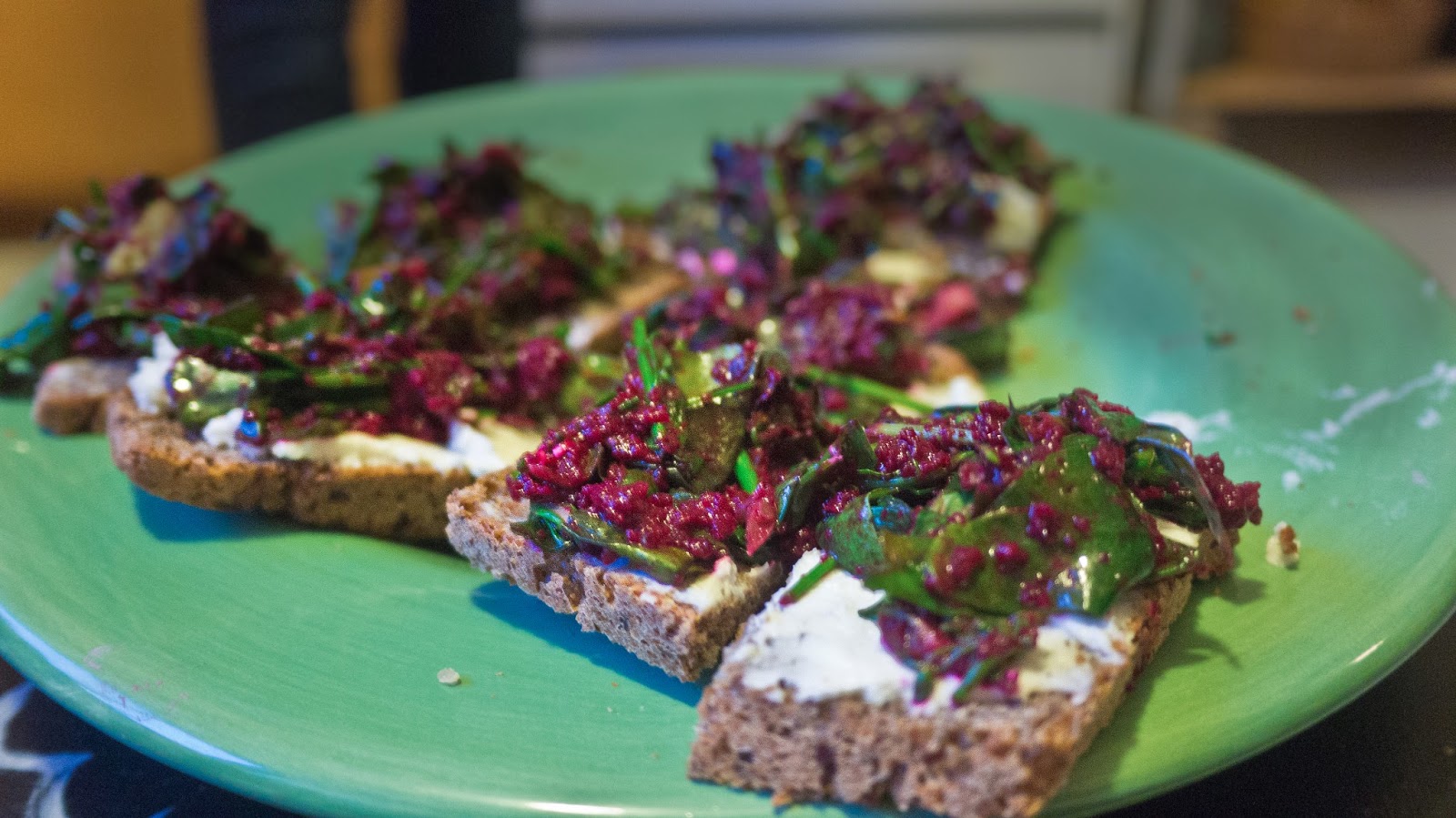 Goat Cheese Toasts with Bitter Greens & Smoked Beet Vinaigrette
serves a couple people as a lunch or a gang as a party snack
A few slices of dark, dense, seeded bread. Ideally this one
1-2 cups bitter greens (chicory, radicchio, dandelion)
Good quality chevre
A few small beets (4-8oz peeled)
Smoked Olive Oil
Rice Vinegar (or another mild vinegar you like)
Extra Virgin Olive Oil
Salt
Pre heat the oven to 425.
Peel the beets and quarter. If the beets are different sizes, try to get the pieces into roughly the same size so they roast evenly. Place on a sheet tray or in a roasting pan and drizzle lightly with olive oil. Roast until a fork goes evenly through the beet. About 40 minutes. Remove from the oven and let cool. This can be done a couple days ahead of time.
Once the beets are cool, place them in a food processor with about 6T of Smoked Olive Oil, 6T of regular olive oil, 4T of vinegar and a hefty pinch of salt. Pulse together until the beets are in small chunks or pureed. As I noted above, you will need to taste and adjust often to find the balance you want. It should be slightly sweet, bright with acidity and deeply smokey. Basically, you should want to eat it with a spoon.
Once you have your dressing as you like it, roughly chop your greens (I used young radicchio, broccoli rabe, dandelion, and kale). Bring a saucepan of salted water to a boil and toss the greens in, turning a bit until they are evenly wet and wilted. Remove from the water with tongs and let drain in a colander over the sink. This can be done a couple hours ahead of time or even the day before.
When you are ready to eat, toast thin slices of the bread. While the bread toasts, toss your greens and the beet vinaigrette together. Taste the greens and probably add more dressing. When the toasts are ready spread each slice with chevre while still piping hot so the cheese warms a bit and top each slice with the dressed greens, a pinch of flakey sea salt and a crack of black pepper. Congratulate yourself for your courage in the kitchen and enjoy.
Tagged with → beets • dandelion greens • kale • radicchio • salad • vinaigrette
Share →
Tweet