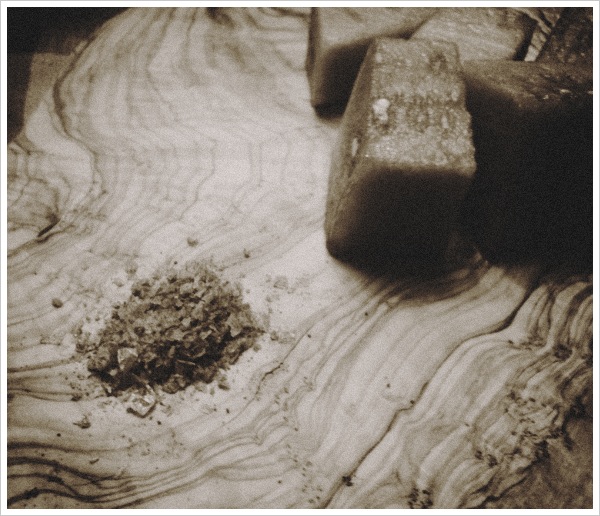 It’s watermelon time. Fourth of July, sweaty afternoons in the garden, barbecues, beach days. Watermelon is the quintessential summer time fruit. The aptly named melon is 90% water, and while it tastes super sweet it has less than half the sugar per gram of an apple. Lately, my appetite for the thirst-quencher is insatiable.

I can’t recall the exact moment when I fell in love with the sweet-salty continuum. My dear friend Eliza, of Milk & Honey, convinced me with her salted chocolate sauce that I had never enjoyed a sweet without its salty counterpart. As a teenager in Costa Rica, I learned the local custom of sprinkling ripe mango with salt. Those bites of juicy, thickly sweet and slightly salty fruit were more refreshing than a glass of ice water or a popsicle, or even a plunge in the Pacific. A few weeks ago, after a run, I tried salting my watermelon as a rehydrating snack. Nature’s answer to gatorade! It was 20 minutes after my run before I needed a glass of water.

Since then I have spiced up my salt mix, fighting the fiery temps with fiery flavors. I like to pre cut the watermelon and store it in the refrigerator for an extra refreshing, any time treat.

Choosing a ripe watermelon: It’s not always easy to tell if you are choosing a ripe melon from a pile at the store or farmer’s market. There are few things more disappointing than cutting into a watermelon and finding dried out, tasteless and pale flesh. Turn the melon all the way around, in all directions to find a light yellow mark where it sat against the dirt before harvest. If you don’t find a yellow mark, it probably isn’t ripe yet. If you still aren’t sure, give the melon a light tap with your knuckle. If it sounds hollow, it should be ripe.

Spiced Sea Salt
1t smoked paprika
1t Adobo or other chili powder
1 T Maldon or other flakey sea salt
Combine the salt mix ingredients in a small bowl and mix well so the spices evenly distribute.
Cut the watermelon around the circumference and place flesh side down on a cutting board.
Using a very sharp knife, carefully trim away the green peel and white rind. (*note: The green part of the peel is incredibly high in chlorophyl and the white rind is high in organic sodium. Both can be added to smoothies and juices in small amounts for an extra nutritional boost) Repeat with the other half or place the un-peeled melon face down on a plate and store in the fridge for later.
Cut the watermelon into slices or chunks. I like my pieces on the heftier side, around 2 inch cubes. Sprinkle with the spiced salt and eat. This is a highly addictive snack.
Other serving ideas
-Skewer the cubes on toothpicks and sprinkle with the salt as a party appetizer.
-Toss smaller chunks of watermelon with avocado, raw pumpkin seeds, arugula, lime and good olive oil. Sprinkle with the spiced salt or put it in a communal pinch pot on the table. Serve as a first course salad with very cold rosé.
Tagged with → detox foods • salad • watermelon
Share →
Tweet