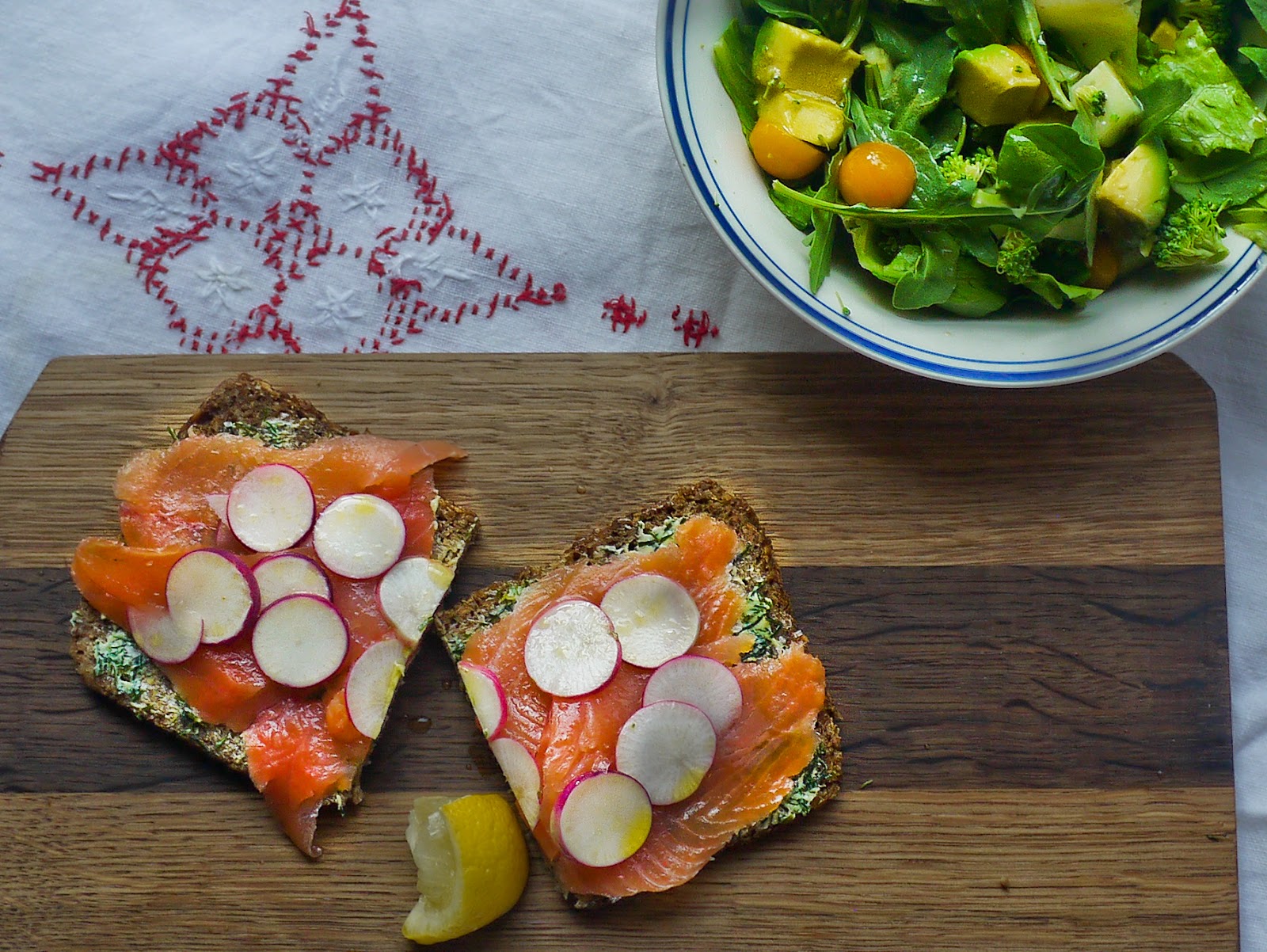 I think you might be way more into salmon than I am. So my sweetheart told me as I suggested for the third time that week that perhaps we should have salmon for dinner. I admit, I love the fish. I chalk it up to my Norwegian roots, and I like it in almost any form. Salmon sashimi is one of my all time favorite foods. The fatty fish at its best when raw is rich and silky and practically needs no chewing. I like salmon out of the can in place of tuna salad or added last minute to pasta with peas and herbs. It is equally delicious seared, poached or grilled, and perhaps best of all, smoked.

I’ve loved salmon since childhood, and though it wasn’t exactly a staple food in our house it was something we ate each year at certain times–smoked salmon on Christmas Eve and Day at my grandparents’ house, and poached salmon in the summer after my parents had fished them from the Upsalquitch River on their annual visit to a friend’s cabin in Canada. They would come home with the beautiful fish stacked in a cooler, their scales still luminous, bellies sliced to show the clean flesh inside of a pink hue so deep it bordered on red. As my Norwegian grandmother wrote in her memoir/cookbook, “Until you have eaten a fine, firm, freshly-caught salmon like this, poached and served with a little melted butter poured over it, and plenty of chopped parsley or dill (that ubiquitous herb so appreciated in Scandinavia), you have missed one of the great gastronomical treats of the world: top quality, fresh-as-possible food, simply but perfectly prepared.”

Salmon is pretty easy to find these days making it an option to eat in any season, but not all fish are created equal. Farmed salmon (one response to overfishing of the wild variety) has become ubiquitous but doesn’t appeal to me at all. It lacks flavor, has more fat, is colored an odd orange-ish with dyes, and is often full of hormones and antibiotics. Even sustainably farmed salmon doesn’t seem right. It is somehow too removed from that beautiful beast of a fish I used to see each summer, a seasonal meal we looked forward too each July, a meal eaten with relish and satisfaction because some primal desire to seek a source of food in the wild, kill it, clean it and feed it to your family had been met. They were healthy fish and we were healthier for eating them. That wan hunk of flesh sitting on ornamental kale behind a glass counter just doesn’t seem the same, energetically speaking.

Still, at times, the Scandinavian blood in me starts calling for salmon and I have to heed its cry. I had such a craving in the middle of our recent heat wave. With each day soaring into triple digit temperatures I had little desire to turn on even one burner of the stove. I bought a few slices of wild smoked salmon from the fish counter, some dark rye bread and a big bunch of dill. I chopped the dill into good salted butter and slathered a thick layer of it onto the bread. 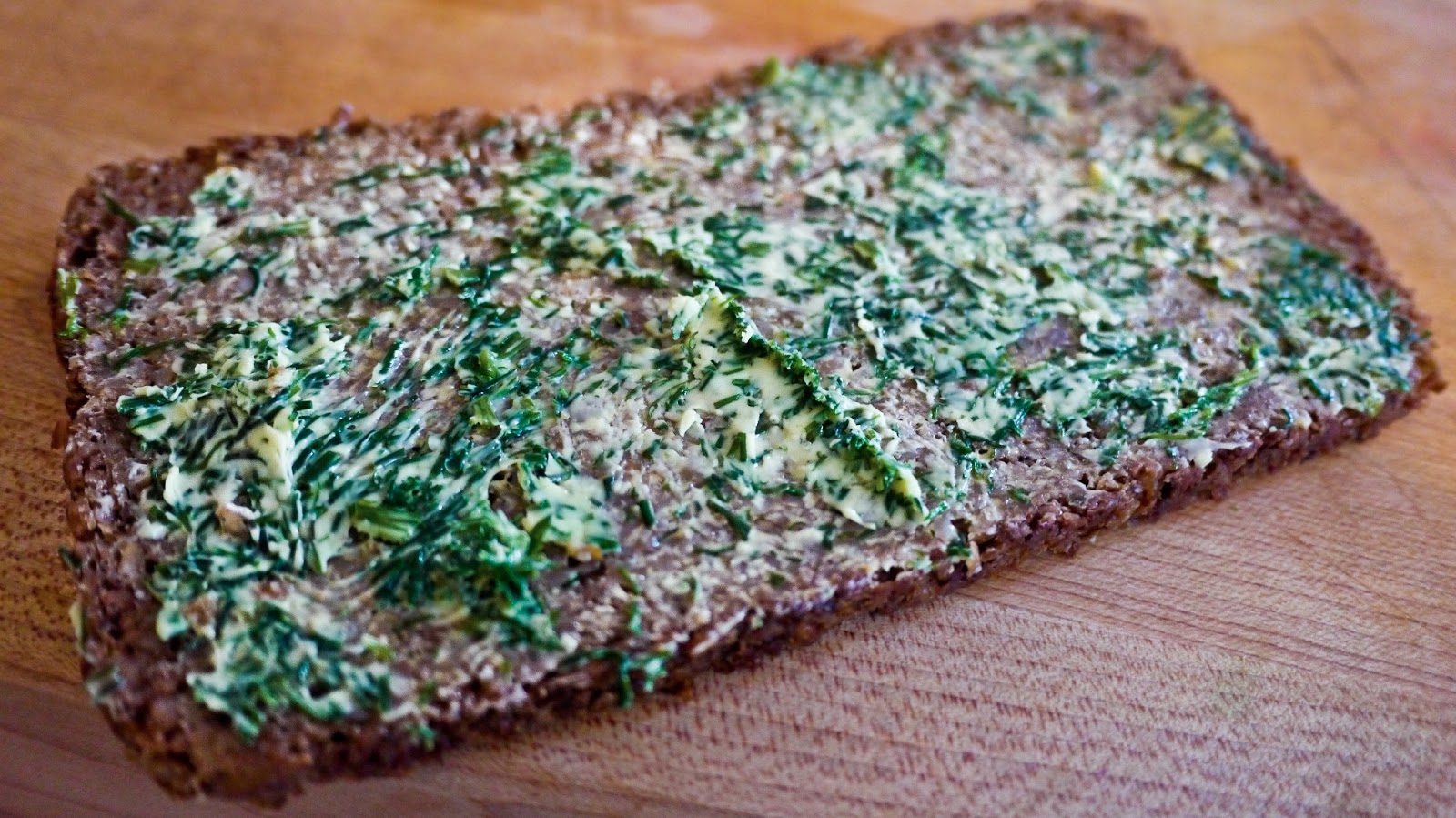 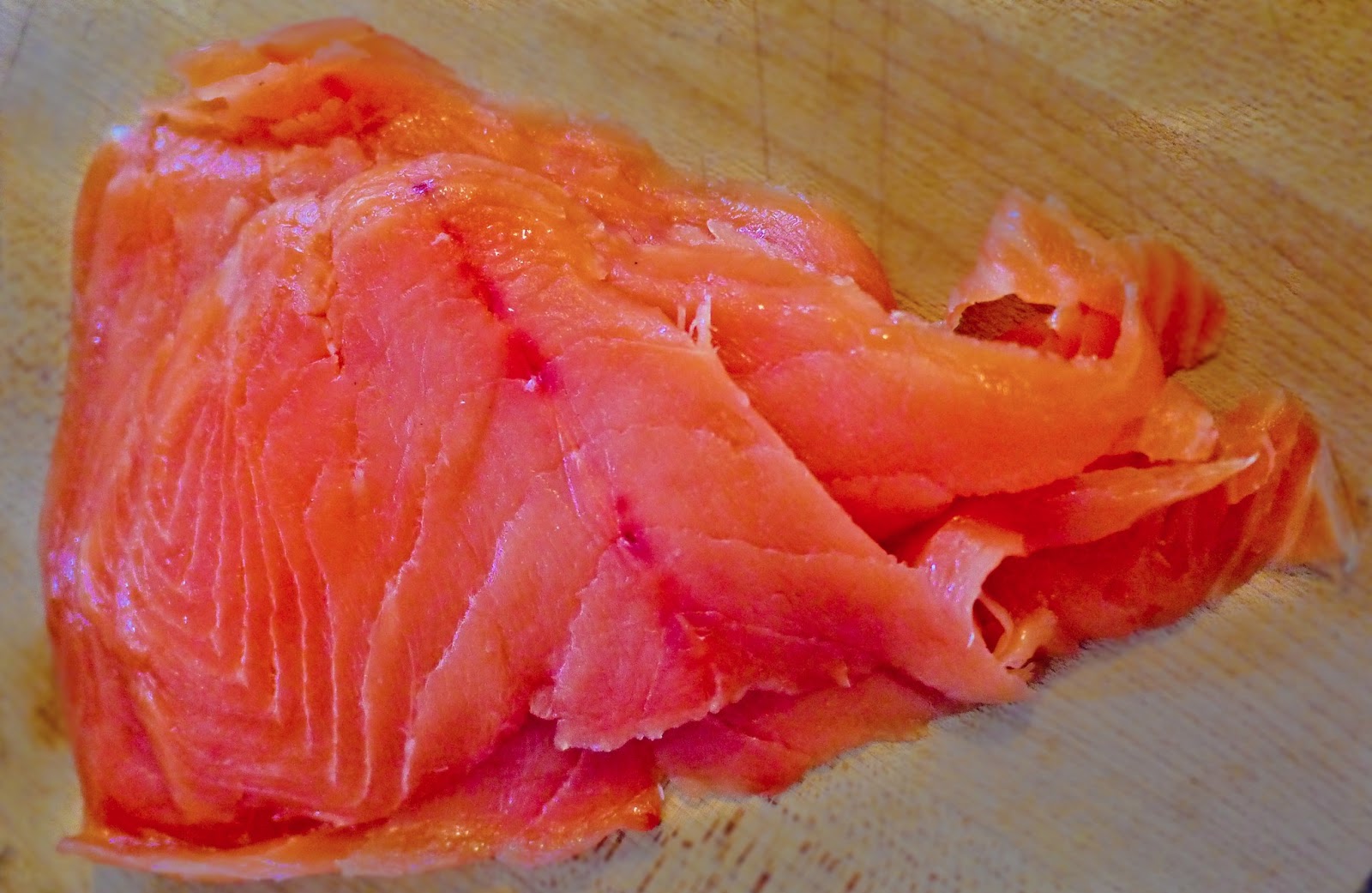 The fish was wild caught, never frozen, smoked in Santa Barbara, and of that same dark hue as the fish from my childhood. I topped it all with thinly sliced baby turnips from the garden, marinated lightly in rice wine vinegar and olive oil, and a big squeeze of lemon. I dined on the cool tile floor with my back pressed against the sliding glass door to the garden. A while later, sated, I looked at my empty plate and without thinking said aloud Takk for maten, which in Norwegian means Thanks for dinner. Sometimes there is just no fighting your roots.


Smoked Salmon Sandwiches with Dill Butter and Turnips
serves 2
2 pieces of dense rye bread, ideally sprouted
4oz wild caught smoked salmon
2-4 T good salted butter, at room temperature
2-4 T dill, finely chopped
2 small turnips or one large one
2 T rice wine or champagne vinegar
2 T high quality olive oil
1/2 a lemon cut in two wedges
flaky sea salt
In a small bowl stir together the butter and dill until well combined. Set aside. (You could use an entire stick of butter and as much dill as you like and save any unused in the fridge for later use in vegetable dishes or melted on top of fish or a steak or anything else you like to eat with butter and herbs.)
Using a mandoline or a very sharp paring knife, slice the turnip into paper thin petals. In a small bowl whisk together the vinegar and olive oil. Add the turnips and stir until well combined. Let sit at least 15 minutes. The turnips can sit in the liquid for up to 2 hours before use.
Slather each piece of bread with a thick layer of dill butter. Be sure to go edge to edge. Leave no centimeter of bread uncovered. Trust me.
Place a couple of pieces of salmon over the butter on each piece of bread, again try to cover the bread from head to toe, edge to edge. Cover the salmon with a single layer of turnip slices. Squeeze lemon over each sandwich and sprinkle with flakey sea salt.
I ate mine with an iteration of Maggie’s Salad. For a heartier meal, add some steamed or roasted new potatoes with more dill butter melted over them.
Tagged with → butter • cooking for one • dill • nostalgia food • rye bread • salmon • turnip
Share →
Tweet